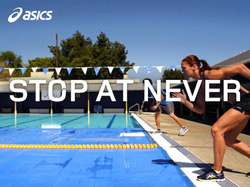 Sports shoe and apparel company ASICS America is doing a "sound" activation against its status as official sponsor of the Nov. 4 ING New York City Marathon. The company, which has backed the marathon for 14 years, is partnering with electro-funk duo Chromeo on a marathon music track with a theme around “Stop at Never.” The music will include ambient noises of New York as they might be experienced by marathon runners during their run, including elements of pulmonary and cardiological sufferance (i.e., heart pounding and breathing.)

People can download the music track at ASICSAmerica.com next week. Per a release, for each download the company will donate the equivalent dollar amount in product, up to $2,620 to a New York City children's support organization.

And the company is also doing  a big takeover at the Columbus Circle Station both with out-of-home elements plus interactive activities. the installation includes a “Sound Room,” which the company says is an immersive audio experience where visitors can trigger “sounds of the marathon.” There are 40 motion-activated controls that activate city sounds: footsteps, car horns, the Grand Central Terminal clock and a celebratory kiss. The station takeover will also include a display that calculates the watts of energy produced by people passing through the station, as well as an interactive shadow runner, and marathon-inspired artwork.

ASICS will continue its “Support Your Marathoner” program, as well. That interactive and social media effort, which the company is doing for the fourth year, lets people send personalized video and text messages to runners. The latter activates this by linking their Facebook and Twitter accounts to SupportYourMarathoner.com, and submitting message requests within their social networks, according to the company, which says that competitors can thereby submit their own updates when they get a message.

During the race runners can also post pre-written messages that will be posted to their Facebook page in real-time at certain mile markers along the course.

Finally, ASICS is also launching a pair of limited-edition shoes commemorating the marathon and based on two of its distance running shoes. The shoes which have custom color schemes tied to ASICS' marathon apparel collection, sport images of New York on the inner shoe linings, and "2012"on the back of the shoe. The shoes will be sold at the ASICS / ING New York City Marathon Expo and at New York City running specialty retailers.