The NBA Gets In Character With 'Hoop Troop' 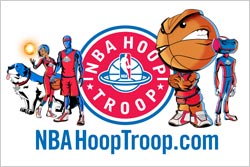 The National Basketball Association (NBA) is launching a new chapter in its two-year-old program, “Hoop Troop,” designed to entice kids to get into basketball. The new effort features five animated basketball-themed characters who will appear online starting on Monday and later at events and on TV. The characters called “The NBA Hoop Troop” are aimed at growing the game of basketball among boys and girls ages 6-12, per the association.

While the cartoon team debuts on the NBA/Cartoon Network joint venture site NBAHoopTroop.com, the five also appear in other digital elements as well as in print and television advertising campaigns throughout the season. The characters will also be at marquee NBA events, and will be promoted through a partnership with KidsHealth.org and Kids Foot Locker, the latter around the launch of a retail promotion in more than 200 stores throughout the season.

Developed by Artifact Design, Inc., the lineup comprises Ally Oop, a female character meant to embody motivation, healthy lifestyle and knowledge about the sport; Swish, who evinces athleticism and skills; Slam, a dunking specialist; Gym Bag, a practical joker who also has all the right gear; and Sneaker, a canine mascot character, whose name reflects his tendency to steal the other characters' shoes.

Saskia Sarrosa, VP of multicultural and targeted marketing for the NBA, tells Marketing Daily that the organization has been targeting youth for several years, beginning with NBA Kids in 2000, but that interest and traffic hit the skids by 2009. "We decided at that time to do market research," she says, adding that among the findings were that kids don't like to be referred to as "kids" and that the association was missing the mark because it was a static program without much in the way of video and games.

To deal with the first program, the organization in 2010 engaged an agency to conduct more research and test brand names, per Sarrosa, who adds that the NBA also realized that getting fans early keeps them interested. "We have seen through research that when you engage 6- to 14-year-old kids, they are 2.5 times more likely to be lifelong fans."

The result, in early 2011, was a joint venture with the Cartoon Network with youth-marketing agency The Geppetto Group. That initial "Hoop Troop" campaign, an extension of the NBA's partnership with Turner Sports, introduced NBAHoopTroop.com, which has video, original programming, and kid-friendly versions of scores and standings. It also includes online interactive games, features, and a membership component. Sarrosa says the platform lifted fan base numbers 12% and viewer numbers 16% since launch. She says the new Hoop Troops characters give kids "another point of connection."

The NBA will take the characters on the road: they will be at the 2013 All-Star game in Houston interacting with other mascots and at the organization's raft of experiential programs via a partnership with Simon Malls (which has ten major malls in the U.S.), plus at the 2013 All-Star Jam Session and Sprint NBA Nation events, per Sarrosa. The latter visits major markets like New York, Philadelphia, Dallas, Los Angeles and San Francisco.