This Just In: Toys R Us Introduces Tiny Newscasters 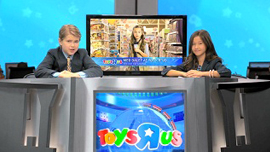 Toys R Us is taking the wraps off its massive holiday marketing campaign, featuring Channel TRU’s fictional newsroom and a handful of grade-school reporters. The effort, which involves some 70 different videos for broadcast and digital use, always comes back to a single question: “Why Shop Anywhere Else for Toys? Why?”

Cameras cut away to different reporters, and true to TRU’s “all the toys, all the time” tagline, give details on the retailer’s new price-match and lay-away programs, as well as highlighting specific toys.

Ads for the chain are always a little tricky, Peter Reiner, the chain’s SVP/marketing, explains to Marketing Daily, “because while it may be the kid who decides what toy is really important at the holidays, it’s the parents who decide where to shop. What we think is so special about this campaign is that it hits all the chords, talking to adults in a kid-centric way. These ads find that balance between adults and children.”

The campaign, created by The Escape Pod, in Chicago, positions Toys R Us as “the toy authority.” TV will continue to air on all major networks, cable stations and such syndicated shows as “Live! With Kelly and Michael,” “Rachael Ray,” “The Ellen DeGeneres Show” and “Dr. Oz” throughout the holiday season, reinforced with radio, print, in-store elements and social media.

What’s missing, at least this year, is Geoffrey, the chain’s animated giraffe mascot. “We use Geoffrey where he makes sense. But this approach, which is more integrated and highlights what makes us different from our competition, makes the most sense for us right now.”

The Toys R Us jingle is also part of the campaign, he says, and will become more prominent throughout the season, especially in its social media efforts, as the campaign moves on.

While most of their parents could probably sing the old tune, “it turns out that none of the kids we were casting knew it,” Vinny Warren, creative director at the Escape Pod, tells Marketing Daily. “So we even created a sing-along music video to teach kids the words.”

Adds Warren: “I love the way the campaign it looks and feels. It’s interruptive, but not in an annoying way. It’s got a nice vibe.”