Google For iOS Takes It To Siri...On Her Home Turf 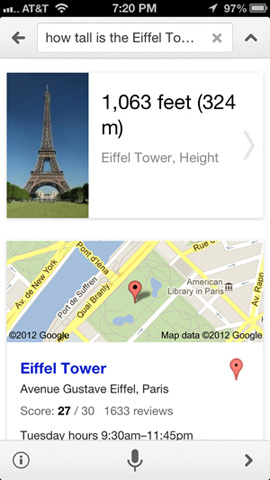 A softer but less functional virtual assistant now can take your natural language queries on the iPhone. Google updated its main search app for iOS yesterday, Oct. 30, with a new and much more versatile voice search system that mimics Apple’s built-in Siri search service both in functionality and in tone. A female voice answers queries such as ‘what is the weather here?’ and ‘what movies are playing in my area?” in much the same way as Siri.

The app renders your voice into text and sends the question to Google search engine for response. In most cases the female voice of Google’s voice assistant provides part of the response. Her tone is noticeably more human than the tinny and synthesized Siri, although the engine is not integrated with the iOS's other basic functions, such as contact look-ups and app launches.

According to the Google blog announcing the rollout, the company is using its recently introduced “Knowledge Graph” -- technology that more precisely interprets queries to deliver answers rather than just references. For instance, asking the new Google app “how tall is the Eiffel Tower?” delivers a voice response: “The Eiffel Tower is 1,063 feet tall” along with an image, map, call link, Web link and directions.

Android users have had Google’s voice assistant for a while already. Recent updates to the Android operating system brought Google’s increasingly advanced natural search to greater prominence so that it is accessible from any place on the device.

In our quick tests, Google’s unnamed voice assistant rendered voice to text in real-time, at least as quickly as Siri, which often lags for online processing. Google’s Miss X (we might as well name her for ourselves), is not as witty as Siri, however. Asking Siri if she will “marry me” usually gets a smart reply, such as “that’s sweet.” Miss X’s more literal response simply tells us that “marriage is a huge decision -- these results from the Web might help” and delivers some of YouTube’s best marriage proposals. In some cases, Miss X defaulted sooner than Siri to standard Web search results. Asking ‘who won the Oscar for Best actor in 1941?’, for instance, rendered Oscar lookups in Google but a specific verbal answer (Jimmy Stewart) and even the film poster for “The Philadelphia Story.”