This compares with the week before on October 22, with daytime homes-using-television viewing of 39% at 9 p.m.  dropping to around 36% for most of the day -- then rising to around 55% at 5:15 p.m., the beginning time of the usual steadily growing higher TV usage.

But on the day of the storm, after around 5:15 p.m. -- when the storm would have a major effect and knock out electricity to some 8 million homes in the region -- TV usage remained around the 50% mark until 9 p.m., far lower than under normal conditions.

By way of comparison, the week before -- a normal viewing day -- witnessed sharp, rising HUTs growing to 97% by 9 p.m.

Bruce Goerlich, chief research officer of Rentrak, stated: "Rentrak's 'big data' approach means that we can continue to report and avoid going black, even in areas hit by extreme weather. Our dependability is a huge differentiator for our clients."

For its part, Nielsen -- which local and national advertisers depend on for current ratings data for their media buys -- said the storm so severely disrupted its viewing collection operations that it would not be releasing complete TV data for November for the New York market. A number of major East Coast markets could also be affected. 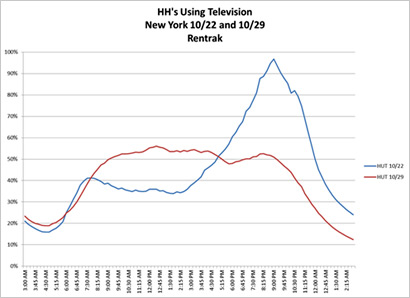