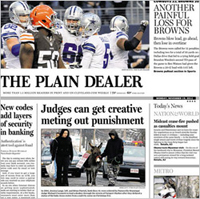 Advance Publications may drop the daily publishing schedule for another big regional newspaper. In a letter to readers published on Sunday, Cleveland Plain Dealer editor Debra Adams Simmons and publisher Terry Egger warned that big changes were coming as the newspaper seeks to “embrace dynamic shifts in the way information is consumed.”

Although the letter did not specify what these changes would be, it noted that the Plain Dealer’s audience “has migrated to digital platforms -- looking online, to mobile devices and tablets for news and information we previously provided only in print."

“The Plain Dealer has to respond to the sweeping changes we see every day in how consumers are getting their news and information -- and how advertisers are marketing themselves in this increasingly digital age.” All this suggests that the strategy will emphasize mobile and digital distribution at the expense of the print product.

In the letter, Simmons and Egger also pointed to the examples of other newspapers owned by Advance in New Orleans,  Syracuse, NY, Harrisburg, PA, and Alabama -- all of which have created new companies to combine management of their print and digital products.

Along with these changes, Advance also announced plans to cut the print publication frequencies of the New Orleans Times-Picayune, Harrisburg Patriot-News, Syracuse Post-Standard, and its local Alabama newspapers from seven days a week to three.

Although the letter claims that the as-yet-unspecified changes at the Plain Dealer are “not about cost-cutting,” this seems improbable, given the plummeting fortunes of the newspaper industry in general. In recent years, total newspaper advertising revenues have plunged from $49.4 billion in 2005 to $23.9 billion in 2011, according to the Newspaper Association of America.

Simmons and Egger struck a somber note in the letter, warning: “If we maintain the status quo, we risk doing what everyone -- our employees, advertisers, and the community -- wants to avoid: disappearing.”