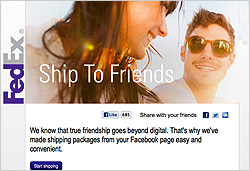 Despite attracting 1 billion users and thousands of brands and retailers, Facebook has never turned into the online shopping hub some expected. But in its push to ramp up revenue growth, the company has rolled out initiatives to bolster e-commerce and retail marketing efforts as the holiday season gets underway.

The most prominent step was Facebook’s launch of a service in September that allows users to buy and send a range of physical gifts to each other directly from the site.

Facebook last Friday also introduced a new tool that enables online retailers to track purchases by people who have viewed their ads on the social network. The conversion-tracking feature is intended to help convince marketers that advertising on Facebook leads to actual sales.

The company is encouraging companies to embrace other marketing and ad options including apps, Facebook Offers and Sponsored Stories to promote special holiday deals and programs. “Our sheer reach with 1 billion people on the platform gives us the opportunity to really broadcast your message to people who may not even be thinking of you,” said Nicolas Franchet, head of e-commerce on Facebook’s global vertical marketing team, hired in April from eBay.

One way to do that is through Facebook Offers, which the company launched earlier this year to enable marketers to create promotions that appear in users’ news feeds. “We like [Offers] better than other couponing options because it doesn’t make you leave Facebook as a user,” he said. Among other examples of holiday-related deals Facebook is highlighting:

-FedEx created a “Ship to Friends” app, which allows a user to ship a package directly from the company's Facebook page and notify the recipient in their Timeline.

-PetSmart asked its nearly 1.5 million fans to vote on Facebook for the top 10 holiday gifts for their pets. Its brand page also provides a gift guide for pet owners.

-Samsung’s “America's Smartest Shoppers” app offers a quiz to test "Shopper IQ", shares Black Friday Deals with you and automatically enters you to win daily grand prize product giveaways. On Sunday, Samsung will announce their Black Friday deals to fans on their page.

The ability to send branded holiday cards through the social network is a bigger trend this year as well, according to Facebook. The Gap, for instance, launched a promotion this month that allows people to send Facebook and Instagram photos on printed postcards via an app called Postagram.

According to Shop.org’s eHoliday survey released in October, more than half (57.5%) of retailers interviewed said they planned to increase their use of Facebook over last year -- the biggest change cited in terms of marketing or retail tactics for the holiday season.

Shop.org projects overall holiday e-commerce sales will increase 12% this year to as much as $96 billion, while total seasonal sales will rise 4.1% to $586.1 billion.