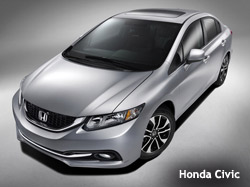 With the Los Angeles Auto Show coming up, pundits are talking about auto trends. That’s not too surprising -- as the show will have a record 50 debuts, half-and-half global and domestic, but more skewed toward luxury and imports. Most of the Japanese and all of the Korean brands are in SoCal, and it's a huge luxury market.

Peter Nesvold, auto and transportation analyst for global securities firm Jefferies, pointed out that the big debut next week will be the new Honda Civic. The car is a mid-cycle redesign -- which is much-needed as the current car, while selling well, has gotten lackluster reviews, he notes. "So we are getting a re-skinned version after only 18 months on the market; but as it's a 300,000 unit-per-year product, it's very important they keep it updated."

The other big car of the show is the redesigned Toyota RAV4, whose styling, Nesvold notes, aligns with the new look for the 2012 Camry and Venza. "It will probably have edgier lines." The other -- obvious -- theme, given California's green orientation and tight CAFE standards, will be fuel economy. There will be 12 hybrid and two plug-in electric reveals, including a plug-in version of the Fiat 500 and Chevy Spark, called the Spark EV.

Edmunds.com analyst Jessica Caldwell added that the show is in a market that represents 11% of retail auto transactions, and tends to be the first to adopt new automotive trends. "Los Angeles is also the second-largest auto market behind NYC, but the New York City market includes parts of New Jersey, Connecticut, and Pennsylvania, so it's a bit skewed," she said, adding that Los Angeles accounts for about 500,000 retail sales, more than half of the entire state. Honda and Toyota are the biggest brands there, she said -- adding that of domestics, only Ford and Chevrolet are in the top 10 in L.A., she said.

Caldwell offered fairly optimistic sales predictions for the end of November and December. She acknowledged that November -- down from last month -- has been the lowest sales month of the year so far, but that year-end campaigns might spur showroom activity. "We will end-of-year ads kicking in, and consumers won't have to wait till the end of December [to get deals.]" Secondly, she added, while the storm effect cut sales 10% early in the month, demand will be strong in coming weeks as auto insurance for ruined cars pays out. "The replacement demand is there."

Interestingly, while the trend has been toward small cars, the new Nissan Pathfinder has gotten huge attention, based on activity on Edmunds.com, per Caldwell. "It's attracting a lot of eyes; Pathfinder is the top considered vehicle on over the past two months [on Edmunds]. We normally see that with compact cars, but we don't normally see SUVs getting so much traffic."