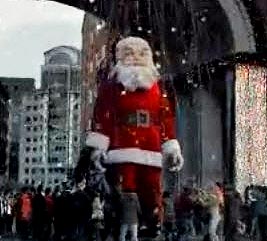 This year’s Christmas TV ad from Coca-Cola focuses primarily on a giant Santa Claus marionette – something of a departure from recent years’ ads (like 2010’s “Snow Globes” and last year’s “Shake Up Christmas” spots), which stuck with human personifications of Santa.

2012’s ad, dubbed “Together We Make the Magic Happen,” shows the “real” Santa (driving a festively lit-up Coke delivery truck) leaving a giant box outside the apartment building of a young woman who appears to be spending Christmas Eve alone.

The box opens to reveal the giant Santa marionette, whereupon the young woman and a group of passers-by proceed to work the puppet together, creating an impromptu parade of celebrants as they walk it down the street. (The young woman ultimately meets up with family for a holiday dinner.)

The message, according to Coca-Cola: “When we come together as a family at Christmas, we rescue the real meaning of this magical season.”

The ad’s music theme, “Something in the Air,” is performed by Lauriana Mae, Grayson Sanders and Jono. (Music video showing artists is also on YouTube.)

The ad, from McCann Madrid, is being rolled out in about 100 countries, reported Adweek.