Survey Finds Consumers Down With OTT 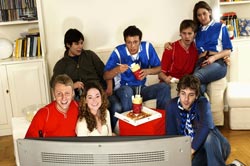 The so-called “second screen” of Internet-powered entertainment options is no longer a secondary option.

According to a new survey by Accenture, half of consumers in the U.S. are viewing so-called “over-the-top” content through a broadband connection on their TV screens, in addition to the programming they’re watching through their cable or satellite provider. The survey finds that 49% of consumers subscribe to a variety of video delivery services, up from 8% when last measured by Accenture in March 2011.

Although all demographics are viewing some form of over-the-top content, the practice is most prevalent among younger consumers. Eighty-two percent of consumers between 18 and 24 years of age watch some form of OTT video, and 60% of them dedicate at least a quarter of their video watching to OTT content (compared with 32% overall). These younger consumers are also more likely to discover new content through social networks. Thirty-five percent of 18- to-24-year-olds said they are interested in social newsfeeds telling them what their friends have watched, compared with consumers 45 and older.

“The reality is the consumer is very much in control of where they find their content and where they consume their content,” Robin Murdoch, a managing director at Accenture’s Media and Entertainment Industry group, tells Marketing Daily. “People are curating experiences, content and their own channel lineups. The notion is that people are going to be creating their own channels.”

Despite this increase in Internet-fueled video entertainment, many are viewing the OTT content in addition to -- or in conjunction with -- programming that comes from traditional satellite or cable sources, Murdoch says. With many of these providers offering their own OTT solutions for screens beyond the television, it would seem they might not have to worry about “cord cutting” as much as previously thought, Murdoch says.

“Those very same [satellite and cable] companies are offering over the top through devices as well. It seems like it’s an additional service,” Murdoch says. “Certainly it seems to be an overall positive story of more programming on all screens.”