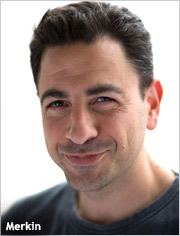 Ari Merkin, the well-regarded creative agency veteran, is teaming with Richard Lent to relaunch the agency that Lent founded 18 years ago -- AgencyNet. The independent digital shop, with a staff of nearly 40, is being renamed TEN and will focus on brand development using the latest digital tools and techniques.

Merkin, a nearly 20-year veteran of the ad industry, has been named chief brand officer and partner at the Fort Lauderdale-based TEN. The shop also has an office in New York.

The repositioning of the agency comes amid what Lent and Merkin have termed “the era of the Do Brand,” a period when brands are more active in creating content and experiences for consumers and engaging with their customer bases in ways only recently enabled by a plethora of new digital platforms and channels.

“We’ve seen powerful things happen with the partnership of brand-building and digital innovation at the core of what we do,” said Lent. “It’s a creative team structure that we’re applying to every piece of business within the agency.”

Previously, Merkin held executive creative director positions at MDC Partners’ Crispin Porter + Bogusky and Fallon. Earlier he was chief creative officer and co-founder of Toy, the now defunct New York-based boutique agency. He is credited with leading the work for the launch of the Mini Cooper as well Truth’s “body bags” anti-tobacco campaign.

“We're a digital agency that can solve those big brand problems,” Merkin said of his new agency’s repositioning.