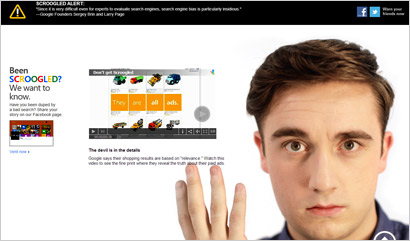 A Microsoft Bing holiday campaign debuts on TV Thursday and calls out Google for recent changes to its Google Shopping service on its search engine. The ads served up in Google search engine results now require retailers to pay for inclusion in the listing.

Bing's ad features a woman warning a friend who recently bought a pan on Google search. "How did you know you just didn't get Scroogled?" the woman says to her friend, explaining that retailers pay for inclusion, so searches don't include all options.

Retailers can still have products appear in Google search results, but brands must pay a fee to have their products served as paid listing ads with images in Google Shopping and google.com.

The "Scroogle" campaign comes on the heels of Bing's attack on Google in September. The Bing It On challenge showed people selecting Bing over Google in a blind test for relevant search results.

Bing's message clearly argues that Google's "dishonest" search results "scroogles" consumers by defining "relevance as how much they're getting paid."

Bing's landing page states that in Google's "under-the-radar announcement," the company admits they built a "purely commercial model delivering listings ranked by bid price. While the PLAs have been around for years, the change in business model gave the ads prominence. "Google Shopping is nothing more than a list of targeted ads that unsuspecting customers assume are search results. They call these 'Product Listing Ads' a 'truly great search'," according to the landing page.

The page also directs site visitors to vent on Bing's Facebook page about how they've been "scroogled." While a few Facebook visitors gave the ad, videos and landing page a thumbs up, more than double have bashed Bing for irrelevance and desperation.