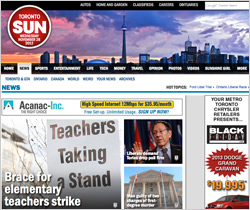 Newspaper paywalls are advancing everywhere, including north of the border. Five Canadian newspapers will be getting online paywalls beginning December 4, when Web sites owned by Quebecor’s Sun Media begin charging for access to premium online content.

The Web sites for the Toronto Sun, Ottawa Sun, Calgary Sun, Winnipeg Sun and Edmonton Sun will all deploy metered access models similar to other big newspapers, which typically allow free access to a certain number of articles before requiring readers to buy an online subscription.

In the Sun Media model, visitors will get free unlimited content for breaking news and blogs. But they will only be able to read 20 premium articles per month, including “all content created by Sun Media columnists, investigative reporters and access to all photo and video libraries, [and] packaged/related content bundles.”

After hitting their 20-article limit, readers will have to buy a monthly digital subscription, which costs $5.99 after a $0.99 trial. A bundle subscription option giving access to multiple Sun newspapers is also in the works.

The planned paywalls are part of a trend sweeping Canadian as well as U.S. newspapers. Sun Media has already implemented online pay walls at two French-language newspapers, the Journal de Montreal and Journal de Quebec, in September of this year. Canada’s largest newspaper, The Toronto Star, will begin charging for online content in early 2013.

Like their American counterparts, Canadian newspapers have also suffered repeated rounds of layoffs. Most recently, Sun Media said it would be laying off 500 employees across its chain of 236 local dailies and weeklies, or just under 10% of its total workforce.