Yahoo's Marissa Mayer: Toward A Mobile Do-Over For Portals 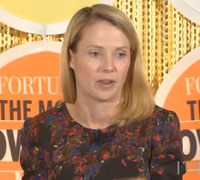 If we haven't seen much of new Yahoo CEO Marissa Mayer in recent months, it really isn’t just because she has been busy with her new baby. She tells Fortune in her first major interview since attaining the job that she has learned to prioritize “ruthlessly” in order to get it all done. She peeks briefly back into the limelight in a series of video clips that Fortune has put online, reflecting on everything from balancing work and life to her company’s renewed focus on mobile.

Yahoo has moved all of its employees from “BlackBerrys to smartphones,” Mayer describes. Note the none-too-subtle implication that BlackBerry can’t even be considered a smartphone anymore, in her estimation. But Mayer insists that a mobile strategy is central to her famously struggling company’s future. In her estimation, Yahoo should be a perfect fit for the portable platforms. “The interesting thing is when you look at what people want to do on their phone, it's mail, weather, check stock quotes and news. That's Yahoo's business. This is a huge opportunity for us because we have the content and all the information people want on their phones." On the other hand, she also acknowledges that Apple has shown how hard it is to do some things well. “We aren’t going to do maps,” she says emphatically.

She is handing smartphones to everyone as a work tool so the staff can “feel” what works and share with one another the best ideas. She suggests that Yahoo may hire the talent it needs to get there via some acquisitions. She also admits that without its own OS or browser or hardware or social network, Yahoo is coming at the market from a different position than the major rivals Google and Apple. She believes there is room for partnering into these areas -- and to be that first app that people install on any phone.

Yahoo has struggled for years to get beyond putting out a lot of kinda okay products on their phones. They were among the first to make the mobile Web look and feel app-like in their optimized portal page. Their bizarre attempt at an iPad magazine-like app was a major misfire, however. To my mind, Yahoo in all of its products has always had a clutter problem. There are so many pieces to the company that it is trying to cross-market all the time that it tends to trip over itself.

And yet, it is always hard to dismiss this company because it maintains massive scale. For most of its major media partners, a one-hour appearance of their ho link on the Yahoo front page can burn up their servers with new traffic. As with AOL, there are pockets of real creative execution in here, like Shine, financial news, omg! and others that really could use strong mobile presence. They actually do a pretty good job partnering with major media, many of whom also need greater scale and presence on mobile. And the have massive amounts of user data they can bring to the table for any partnership. There are a lot of pieces here waiting to be brought together.

In fact, if you do a side-by-side comparison of the aging portals of yesteryear, Yahoo, MSN and AOL, on a smartphone browser you see pretty much the same things. They all are trying to leverage the technology to surface as much content as possible via lush images and swipe mechanics. AOL and MSN prompt you to make them into home page icons and access on-board location service to localize the some content. While there is some nice use of technology by all of them (AOL has always been especially strong in this), none stands out as having a clear character or voice. Theoretically, one would expect the portal play to have special relevance on mobile -- if only because users have embraced aggregators like Flipboard, Zite, Pulse, News Republic, etc. Each of these portals has verticalized themselves is certain apps such as MSN Autos, AOL’s Engadget and Moviefone apps, etc. In the end, the best strategy for these guys may be spinning off new vertical brands without obvious ties to a portal past that still benefits from portal scale in promotion and crosslinking.

Some of that is happening. The MSN-powered Wonderwall.com celebrity news and images site is a compelling smartphone experience, and more engaging than Yahoo’s own omg! for phones. But if you do a search for Yahoo Finance in my iPhone Safari browser, the link brings you to the un-optimized Yahoo Finance front page.

There seems to be a real opportunity here for the portal empire of old to reassert itself on mobile platforms. But there is a certain blandness that comes with the wide embrace the old style portal required that doesn’t quite fit on devices. They all wanted to be digital versions of TV networks on some level, and in this they misread the very revolution of which they were a part. Digital media was about verticalization, personalization, narrowcasting -- not mass media on the desktop. The portals always seemed to give a nod to all of these developments without always really embracing the change fully. Does anyone really have any emotional attachment to the AOL, MSN or Yahoo brands?

To be sure, Mayer’s instincts are probably right in detecting that the early days still are here. Content habits are evolving, and there is another wave of middle to late adopters who will want and need aggregators and hand-holders. There is room for content and a distribution partnership that will help put Yahoo in front of people on their handsets and tablets. But my sense is that in order to realize their potential here, portals like Yahoo need to get over their own brands, and optimize not just content -- but also their identities for mobile.