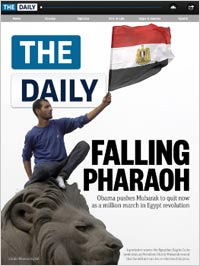 News Corp.’s planned shutdown of The Daily underscores the challenge of selling mobile news subscriptions for even the most ambitious and well-funded ventures. In explaining the demise of the iPad newspaper, News Corp. Chairman Rupert Murdoch said simply that it didn’t attract a large enough audience to support the business model.

With a stated goal of signing up “millions” of subscriptions when it  launched almost two years ago, The Daily had only attracted some 100,000 as of July. The disappointing level of sign-ups, at as little as 99 cents a week, led to layoffs later in the summer and ultimately, to Monday’s announcement.

New data released today by mobile ad company Mojiva shows what The Daily was up against by betting on a paid model. When asked whether they would pay a subscription to access their favorite news source, 59% of U.S. tablet users and 69% of those in the U.K. said “No.”

In the U.S., a quarter of tablet users said they already pay for a new subscription, and 16% said they would, but don’t. Separate research from the Pew Research Center’s Project for Excellence in Journalism in October was even less encouraging about tablet subscriptions.

It found that only 6% of consumers said they had ever paid for news on their tablet compared to 14% in 2011. At the same time, nearly a fifth (19%) of mobile news consumers (on tablet and/or smartphone) had paid for a digital subscription in the last year.

“There’s the challenge of creating a new brand, of being known by enough people,” noted Amy Mitchell, acting director of Pew’s Project for Excellence in Journalism, in relation to The Daily. “It’s not easy to have a mass audience of any kind today.”

The new Mojiva study, based on surveys of 1,000 smartphone and tablet users each in the U.S. and the U.K in September, indicate that there is a growing appetite for getting news on mobile devices. Seventy percent of U.S. tablet users check two or more news sites or apps daily, along with 61% of their U.K. counterparts.

Nearly a quarter (24%) of U.S. smartphone users get their primary updates from their phone or tablet, and 30% learn about breaking news stories via text alerts or notifications on one of their mobile devices. That compares to 25% who rely primarily on TV for breaking news.

The company asked people what factor(s) would make them pay more attention to ads. For U.S. smartphone users, relevance (25%), humor (19%), and information of interest (15%). Tablet users pointed to the same factors.

When it came to garnering attention on a mobile news site or app, two-thirds (67%) of U.S.  smartphone owners, 54% of U.S. tablet users, and 65% of U.K. tablet users said they would be more mindful of a mobile ad if the ad content was relevant to the adjacent news story.