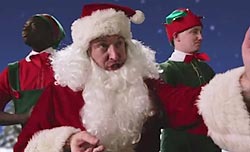 The “Twelve Days of Christmas” is nothing; Boost Mobile is doubling down (and then some), celebrating every day in December, even if it has to make the holidays up.

In an online marketing promotion, the prepaid wireless carrier is offering up Christmas-like carols for every day, turning each of December’s 31 days into its own special holiday (as well as acknowledging the special ones already taken, like the 25th). Among the new mini-holidays being celebrated in song: Chocolate Covered Anything Day and Festival for the Souls of Dead Whales Day.

The songs are obviously meant to be presented with a tongue-in-cheek tone. One, for “Gazpacho Day” on Dec. 6, follows the melody of the Mariachi song “El Jarabe Tapatio” (The Mexican Hat Dance), with the lyrics: “Gazpacho, gazpacho, gazpacho/It’s your special day we are told/gazpacho, gazpacho, gazpacho/The only soup they serve up cold.” At the end of the song, one of the musicians notes that gazpacho is actually a Spanish creation.

“Boost has always given a voice to the underdog,” said Dave Horton, creative director at 180LA, which created the effort, in a statement. “So, for the holidays we aren’t just celebrating Christmas and Hanukkah, we’re going to celebrate them all. We wrote 31 carols for the 31 holidays in December, each using a different genre of music.”

The month of holidays is being promoted through a microsite, www.boostcarolcards.com, which also includes an interactive calendar through which users can click on days and watch the corresponding holiday carol. (There are also carols for the traditional holidays of Christmas, Kwanzaa and Hanukkah). Each of the songs and videos are sharable to friends via e-mail and social networks. Users sharing the cards will receive a promo code redeemable for discounts at boostmobile.com.