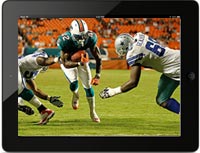 Tablet owners' use of multitasking while watching TV keeps growing.

Now, some 20% of U.S. TV homes have one, according to Nielsen. This compares to a 50% U.S. penetration of smartphones in the U.S.

Some of this may have to do with general ownership of tablets. Nielsen says tablet owners tend to be older and more affluent than smartphone owners.

Nielsen says nearly one-third of tablet users ages 25-64 check sports scores while watching games -- and a majority of owners use apps while watching TV across the board.