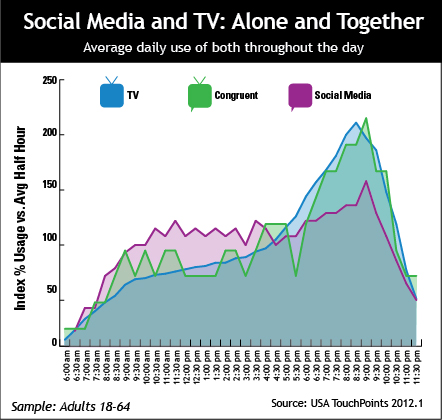 The considerable amount of enthusiasm for Social TV is possibly only matched by the desire to know more about what is actually going on –- how the relationship between social media and TV actually plays out and what each delivers to the other.

This USA TouchPoints analysis examines the extent to which both media are used in isolation throughout the day.  It also looks at use of both during the same 30-minute period of time to determine how second-screen behavior specifically relates to social media among 18-64s as a whole – not just among social media users or viewers of particular programs or networks.  (In all three cases, data is indexed against use in the average for all 30-minute periods throughout the day.)

The analysis shows TV to be relatively low throughout the day, only to climb significantly from late in the day into prime time, where it is the dominant single medium.

More noteworthy, social media actually follows a similar pattern.  Although attaining a higher level of use during the day than TV -– and while it is eventually surpassed as TV viewing rises late in the day -- the peak time for social media use almost exactly mirrors TV.

When we look at congruent use of TV and social media (when both are used in the same 30-minute period) we again see a similar pattern where peak combined usage matches prime time for TV and social media individually.  This is consistent with other USA TouchPoints analyses, where we have seen as much as 30% of total social media use occurs congruently with TV viewing

This initial analysis would  support the view that the relationship between social media and TV is real, but it should be stressed the data does not imply a direct link between content viewed on TV and any sharing, liking, commenting or other activity with regard to the same content via social media.

It notes that the conditions for promoting and developing this behavior are clearly favorable.