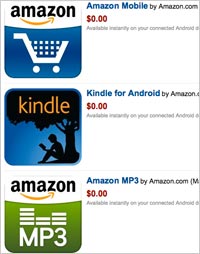 Amazon may have been a latecomer to the mobile app business, but it has clearly caught on with consumers. The online retail giant on Thursday revealed that downloads from the Amazon Appstore for Android have increased 500% over last year, fueled by the proliferation of its Kindle Fire tablets and growing support from Android developers.

Amazon noted the growth in downloads as part of an announcement about the rollout of a new A/B testing capability for Kindle Fire. It’s the latest in a series of tools Amazon has introduced to woo developers, including GameCircle, with features for boosting engagement in game apps.

In addition to cultivating developers, growing adoption of the Kindle Fire and the expansion of the tablet line with the release of the HD model in September have helped boost the Appstore’s popularity. IDC data showed that Amazon’s share of tablet shipments in the third quarter increased to 9% from 2.5% in the year-earlier period and 4.8% in the second quarter.

Furthermore, the technology research firm projects that Android tablets overall will capture 42.7% of the market this year, closing the gap with the iPad, whose share will slip to 53.8%. Still, the 500% increase in downloads cited by Amazon partly reflects the comparison to a small base with the launch of the Appstore in March 2011. It did not disclose the actual number of downloads Thursday, making it harder to gauge the gains Amazon has made as an app purveyor.

But findings from app advertising and analytics firm Flurry in March showed the Appstore was making progress in generating revenue as well. IThe Amazon app storefront had higher sales per user than Google Play, helped by its immense base of customer credit card accounts.

While the Appstore can’t match Google Play’s offering of the more than 700,000 titles, its catalog has grown from 3,800 to more than 50,000 in the last 18 months. Also, it vets apps more tightly than Google to maintain a more consistent level of quality.