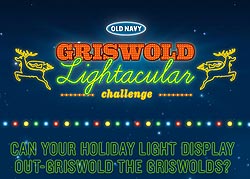 Old Navy has gotten a lot of attention for its seasonal TV campaign featuring "The Griswolds," but there are some under-the-wire digital happenings aligned with its overarching "Holidays All the Way" campaign of which the TV work is part and parcel.

For example, the apparel company has a marketing partnership with social content channel BuzzFeed that includes a branded microsite, "Deck the Web," video content and tie-ins to the Old Navy Facebook page. The latter drives participation in a digital promotion, "Griswold Lightacular Challenge."

The Old Navy "Deck the Web" BuzzFeed microsite has an app that lets users add -- via a click-and-drag feature -- virtual "Holidays All the Way" ornaments to any Web site. Needless to say, the overlay is only visible to the user or whomever he or she shares it with.

The "Griswold Lightacular Challenge" allows users to upload photos of their holiday lights and general set-ups for a chance to "Out-Griswold the Griswolds." The effort dangles either a $10,000 Clark Griswold Award or one of two $2,500 "Rusty and Audrey Griswold" awards.

Wrapped up with the online work is a 60-second video featuring Jordan Knight of New Kids on the Block and Johnny Mathis. The video is both on YouTube, and on Old Navy’s BuzzFeed site, per Michele Schuh, director of media for Old Navy.

Schuh tells Marketing Daily that the panoply of digital elements is a first for the retailer. "We always do year-end campaigns, but they are primarily driven by TV, circular and radio. This is the first time we’ve done a really integrated digital extension." She adds that the digital program is not so much about driving retail traffic as it is to drive sentiment and awareness. "It really is to have that two-way conversation in the social space; it lets people participate with the brand in a fun way."

Ben Rosen, BuzzFeed account manager, tells Marketing Daily that the channel works best that way -- as a branding platform, versus bottom-funnel deal maker. He explains that BuzzFeed is content-centric and a de facto social media platform, since site content is designed to be inherently buzzworthy. "Brands aren't coming to us to do traditional banner ads or to offer coupons, but to develop a shareable voice."

Old Navy is also extending the holiday campaign on the ground with a giant sledding hill outside the Grand Ballroom at Hollywood & Highland in Los Angeles, where there will also be a giant-screen showing of "National Lampoon's Christmas Vacation."