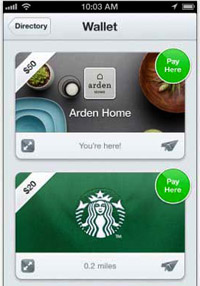 up Square is getting into the holiday spirit, adding the ability to send digital gift cards through the Square Wallet app. The new feature is also integrated with Apple’s Passbook app, giving iPhone users another way to present and redeem gift cards.

Before sending a card, existing users of Square’s consumer-facing Wallet app (formerly Pay with Square) have to upgrade to the new version of the app for iOS and Android, released Sunday. Once downloaded, a user searches through the company’s directory of 250,000 businesses that use Square’s iPad-based system for processing payments.

People can send cards worth $25, $50, $100, or choose another amount, along with an optional note. The card is emailed to the recipient, who saves it to their Square Wallet app. The gift card can be redeemed through the Wallet app, or for non-app users, by showing the card’s QR code at the register.

iPhone users running iOS 6 can also opt to save a gift card to Passbook, Apple’s digital wallet for storing loyalty cards, coupons and airline boarding passes. Square CEO Jack Dorsey told AllThingsD the Passbook integration is aimed at getting more consumers to use Square, while driving more business to merchants.

Square most high-profile retail partner to date is Starbucks, which has taken a $25 million stake in the company, in addition to adopting its technology for processing credit and debit card payments.

Still, it’s still early days for Square Wallet, as well as Passbook. It’s not clear how much of a lift participating businesses will get from the addition of gift cards during the holiday season without a big promotional push. The Wallet app has been rated by only about 400 people in the App Store (3.5 stars) and 800 in Google Play (4 stars), suggesting many consumers still aren't hip to Square even if businesses are.