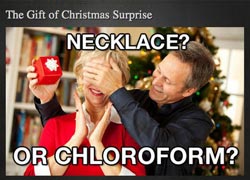 Here, honey -- have a dose of chloroform with your Christmas present.

No, things haven't gotten that weird around the Smith household this season. I am just paraphrasing Virgin Mobile's incredibly misguided online promotional creative that flew and then crashed loudly over the weekend. At the carrier’s site, it initiated a playful promo slide show riffing on the days of Christmas that included a husband hiding his wife’s eyes as he offers her a wrapped box. The tagline? "Necklace? Or Chloroform?"

The Everyday Sexism Project caught wind of this ad (which was more senseless than clueless) and started a Twitter campaign "Please tweet @richardbranson @virginmobileus if you think using rape/domestic violence jokes to sell products isn’t ok."

Of course, Sir Richard doesn’t own the company anymore. It was sold to Sprint a while ago. But he responded by posting his dislike of having the brand sullied this way and called Virgin Mobile to complain.

Weirdly enough, the ad was taken down and replaced by another creepy bit of creative showing a leering Santa with the tagline "Sees you when you're sleeping…LADIES."

Because that makes it all better, huh?

When Virgin Mobile got around to answering the complaints publicly, its head of brand marketing Ron Faris sent an email to BuzzFeed explaining that the ads had been placed without Virgin Mobile’s approval and called it "a rogue post by an external agency." Of course, Virgin Mobile does not support sexism or domestic violence, Faris assured BuzzFeed. According to Branson on his blog, Virgin Mobile management "acknowledge a dreadful mistake was made."

A Sprint spokesperson tells us that the ads did not involve Virgin Mobile's agencies of record for media, Digitas, or creative, Mother New York. "Among our brand and marketing folks are several agencies doing a variety of online, social and digital work," Sprint tells us. "The image was not approved, and was removed when we discovered it."

Which is all fine and good. But a "rogue post" by an external agency? Are there gangs of creative and media buyers doing drive-bys of unsuspecting sites with "rogue" units that look a lot like a planned campaign? Do they have telltale tats? Is there a no-snitch code of silence among them?

Personally, I am all for dark humor. Mimicking the form and tone of the typical Web meme is clever enough. And I, for one, am not ready to toss out the old comic trope of marital resentment. It is just too rich and enduring a vein. But the emphasis should be on "humor." The sin of this "rogue post" is that it went astray of being even remotely funny.