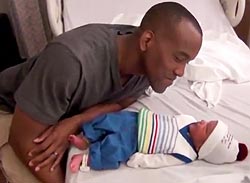 The American Red Cross is launching a new “storytellers” campaign featuring unscripted stories created and filmed by people actually helped by the charity.

The first ads are part of the organization's holiday giving campaign and feature people impacted by home fires and flooding.

Additional TV and print ads, which feature personal accounts of how those featured have been touched by the Red Cross, are being released as public service advertisements (PSAs).

The ads, which tell the stories of people across the country, show the scope of the organization's work including blood collection and supply, support to America's military families, help to vulnerable communities around the world, disaster relief, and health and safety training and education.

"We wanted to tell the story of the Red Cross through the people we serve, while at the same time demonstrating the breadth of our mission," said Peggy Dyer, chief marketing officer of the Red Cross, in a release. "Many people know the organization for our work in major disaster relief or blood collection, and the goal for this storytelling campaign was to bring our everyday mission to life in a personally relevant way."

The Red Cross enlisted 300 storytellers -- people helped by the organization's five lines of service -- and gave them cameras, film and told them to tell their Red Cross stories.

The first ads feature two New York families whose homes were destroyed by fire and a Washington family devastated by a flood. Future ads will include stories of a Virginia resident whose newborn twins were saved by a single blood donation, a Michigan teenager whose Red Cross CPR training helped him save a life, and an Oklahoma family who lost their home in a tornado.

The Red Cross worked with BBDO New York on the concept and opted to have the storytellers speak from the heart and not from scripts, and create the entire pieces themselves from filming their story to hand-writing the end card.

This is the first time many people will hear firsthand the real voices of those who have been helped by the Red Cross, said Linda Honan, senior creative director at BBDO New York.

"From the beginning, we made a conscious decision to step aside from our usual role as creative brand storytellers,” Honan said in a release. “Instead, our role was to equip the people who have been touched so deeply by the brand with the tools that would enable them to tell their stories themselves."

The Red Cross reviewed more than 1,200 stories that were submitted online and then sent out cameras and booklets to 300 individuals last May. Eliot Rausch, a short-film director and documentarian, produced the series.

During this holiday season, a limited number of airings will include footage from Hurricane Sandy as well as the storytellers campaign. The Red Cross will release additional PSA spots in January that include stories of blood recipients, people who were saved by CPR and First Aid and others who lost their homes in tornadoes.