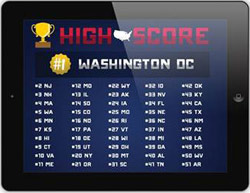 Mobile gaming and pharmaceutical ads may seem to be an unlikely combination, but new data from Jumptap shows that pharma ads running in games on its ad network saw the highest increase in click-through rates of any ad category in November.

Click rates for pharma ads increased 315% in mobile game apps compared to rates for the category on average. Click rates for ads run by game companies also did well, increasing almost 200%. Rounding out the top-five-performing ad verticals in the gaming channel were retail, with click rates up 35%; automotive, 17%; and sports retail, 9%.

The fact that pharmaceutical marketers are focusing on the mobile gaming category underscores that the gaming audience is no longer limited to teens and twentytsomethings. “It’s a very broad audience in gaming,” noted Matt Duffy, VP of marketing at Jumptap. According to the Entertainment Software Association, the average age of gamers overall in 2012 was 30, with 47% female.

ComScore estimates about 80 million people in the U.S. play mobile games, with a third playing almost every day. Duffy points out that some of the pharma campaigns running on Jumptap’s network last month were aimed at reaching a younger demographic.

The Jumptap study released today also singles out Washington, D.C., as the capital of mobile gaming. The city had the highest concentration of gamers, based on ad requests in games per capita. With a weekly average of 29 gaming ad requests per resident, its average was nearly five times that for any of the 50 states.

New Jersey, New Hampshire and Massachusetts were among states with the most avid gamer populations.

When it comes to smartphone real estate, iOS had the edge over Android, with the Apple mobile platform accounting for 52% of gaming traffic on the Jumptap network compared to 47% for Android.  iPhone, iPad and iPod make up the top three devices for game play.

Android-based devices, however, including the Samsung Galaxy Tab, Motorola Droid Razr and Kindle Fire rounded out the rest of the top 10 devices in gaming traffic. Prime time for gaming across platforms is afternoon and evening, with those periods together accounting for 68% share of traffic on a given day. Jumptap suggests advertisers use day-parting to capture the most attention during peak gaming times.

Marketers that advertised in Angry Birds over the Black Friday weekend might also have benefited from a surge in audience. For the second year in a row, Jumptap looked at how much people were playing the popular game around Walmart stores. It found the volume of play peaked at 11 p.m. the night before Thanksgiving and at 5 a.m. as eager shoppers waiting in line flocked to Angry Birds as a welcome diversion.