Kentucky Kicks Ass, But Not Officially (Yet) 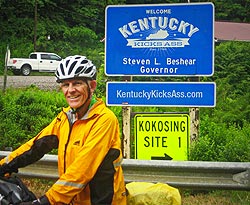 Some Kentucky agency executives want to light a fire under Kentucky's tourism marketing.

Last year, they received attention for trying to get its "Kentucky for Kentucky" ad in the Super Bowl by crowdsourcing media dollars from lovers of the Bluegrass state.

Now, they have created a Web and social media campaign under a raucous new tag-line to grab people by their privates, boost tourism, attract new business, get some pride going, and generally change what people think of the state (as an immense horse farm and a mint julep and bourbon bar at Churchill Downs, where a certain fried chicken colonel is working the oil vat in the back.)

The firms took as their basic premise that the current tag line, “Unbridled Spirit,” does little more than support the above. The new, guerrilla-driven tag is "Kentucky Kicks Ass."

Evidently, per the proponents of the more daring direction, when you Google “Unbridled Spirit,” the first results are horseback riding lessons in San Antonio, Texas -- not exactly the intended result.

The new tag, the logo and layout -- which was developed by Brian and Sara Turner's Lexington-based art house Cricket Press -- has gotten a lot more attention.

"To be honest, this is a guerrilla campaign." Hiler says. "Last year we raised about $112,000 for the Super Bowl crowdsourcing campaign. That was kind of farfetched. Nobody had ever tried it." He says the fan base kept growing and becoming more popular on sites like Facebook. "Somewhere along the line, 'Kentucky Kicks Ass' came up; people loved it."

Then outlets like TheLexington Herald-Leader, Louisville Insider, The Los Angeles Times, Mashable, and TheNew York Times picked up on it, and it began trending on Twitter on a regional level, per Hiler, who says the video on the project has received some 30,000 views.

He says some people think the "Kick Ass" line has become the official tag from the media attention it has received and social media buzz.

"It's really to get people into the brand again,” Hiler said. “The state-run campaigns are safe, but they don't foster the pride that we are trying to bring."

Print ads -- albeit ones that haven't run yet -- are brash and say things like "In Kentucky there are more barrels of bourbon than there are people," and "In Kentucky fried chicken was invented. Cheeseburgers too. Possibly even bacon."

The ads also plays on Kentucky having outdoor attractions such as traditional trails like those for horseback riding, hiking, and mountain biking -- but also a bourbon trail, a "brewgrass" trail, and even a donut trail. "We want to see an increase in tourism. And we want to diminish stereotypes," says Hiler.