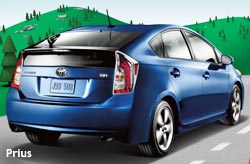 The organization is the Washington voice for around 13 import-brand automakers, making up about 40% of the market here. It's worth noting that today about 50% of what these automakers -- including Honda, Nissan, Toyota and Hyundai -- sell in the U.S. is also assembled here, part of a strategy to avoid the vicissitudes of the global exchange rate.

Stanton talked about the statistical and political side of fuel efficiency and emission targets set by this and former administrations. Actually, noted Stanton, it was Republican President Gerald Ford who established CAFE the '73, and that CAFE and MPG are directly proportional.

And in 2008, under the aegis of famed EPA administrator Carol Browner, the National Highway Traffic Safety Administration, California Air Resources Board and environmental groups like the Union of Concerned Scientists hashed out an aggressive emissions and MPG standard to be extended to the entire country.

Phase One of the new standards stipulates 34.1 mpg for 2016 model-year vehicles; Phase Two: 60 mpg by 2025. That program includes an exit ramp for automakers in around 2016 pursuant to a "mid-term review" where automakers would not be held to the fuel-economy standards if they demonstrated to agencies that there was no way they could achieve them, per Stanton.

"If it turned out to be too high an expectation, it would be adjusted down," said Stanton, adding that while there is uncertainty with regard to the technology mix going forward, "Some would have you think that every vehicle by 2025 will be a hybrid or some variation, but most of us think the internal combustion engines (ICE) will be the predominant technology for reaching with these standards," he added. By then, he said, internal  88.3% of market versus 95.3% will be ICE.

Stanton pointed out that today, while over 60 advanced tech vehicles are on the market, nearly 75% of those are hybrids, and all of alternatives comprise 3.4% of total U.S. sales, though by 2015 45 more hybrid vehicles will be available, and even now 14% of Toyota sales are now hybrid.

From the consumer perspective, the challenge is about regulatory and economic. "If we can’t make them competitive they won't sell." That also means there has to be a benefit to owning, which is demonstrated by sales in the two biggest areas for these vehicles where such vehicles can take the HOV fast lane, a point made by at least one automaker in TV ads.

On the political side Section 177 of the Clean Air Act lets states adopt California's 90% zero-emission standards by 2020, a goal that can be met by either electric or fuel cell vehicle, with a very small number plug-in hybrids. Stanton said that by 2025, some 1.5 million vehicles on the road will have to be zero-emission.

That may be an infrastructure problem electrics pose for every state, but especially ones that don't have plans or the kind of head-start California has. "The Section 177 issue bothers me because nine other states have adopted California's standards, but what are they going to do for infrastructure?" And climates are harsher in some of them, and EV's perform worse in very cold and hot weather."

He also went into legislation around texting while driving, using a sign on a church to make his point. "Honk if you love Jesus, text if you want to meet him."