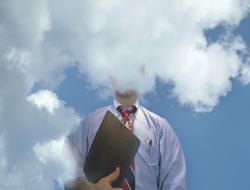 Cloud-based marketing services continue to strengthen, and by no means do I suggest that these services are bad for online marketers.

Oracle recently paid $871 million for Eloqua, which delivers cloud-marketing technology that allows marketers to build conversations with existing and potential customers. While the deal points to significant changes in online marketing, what if that cloud infrastructure fails?

The research firm's analysts believe that cloud services will become the standard for storage, content access and security of consumer media in 2013. Businesses will spend about $40 billion on cloud infrastructure this year -- up to nearly $100 billion in 2016, according to research firm IDC.

It happened to Netflix during Christmas Eve. Blaming Amazon for the outage, the streaming video site uses Amazon Web Services. Reports estimate that more than 27 million of the 30 million streaming global subscribers in the Americas were potentially affected. By Tuesday morning the service had resumed.

In fact, more than 5 million businesses, such as contract manufacturer Celestica, as well as the American Red Cross, "have gone Google." The applications sit in the cloud, so computer owners can access the apps from numerous devices without having to download the application.

During the next several years, new companies and unique partnerships will emerge that rely on a cloud-based delivery model for their service, according to Parks Associates.

"Head in the Cloud photo from Shutterstock"