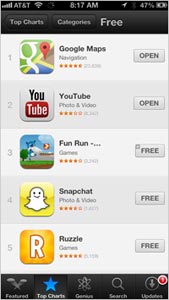 The holiday scramble to get apps high on their respective marketplace leaderboards in time to attract new device owners occurred in November about as predictably as Black Friday. According to app marketing service Fiksu and its monthly indexes, the cost to acquire a loyal user forapps in the Apple App Store rose 30% to $1.38 for the month. Part of the marketing cost spike came from markedly decreased download activity. In its monitor of the top 200 free apps on the iOS system, Fiksu saw a drop of 15.4% to 4.57 million downloads.

The dip in app activity comes largely from the effects of the iPhone 5 launch and iOS 6 release in September and October, which caused a spike in downloads for October. The 5.4 million daily download rate that Fiksu measured in October had represented a seven-month high.

Marketing costs routinely rise in advance of the all-important holiday season for the app ecosystem. In this case, however, the sharp 30% spike was a notable turnaround from a long stretch of declines. Fiksu says that increasingly marketers are finding greater efficiencies in their marketing spends and app seekers are finding apps through organic searching. Fiksu CEO Micah Adler states: “We can expect costs and download volumes to climb through December, much like last year, as marketers spend heavily in preparation for the flood of new devices and rush of user activity and app discovery around Christmas.”

In fact, Christmas Day proved to be a boon for the tablet ecosystem. App metrics firm Flurry reported more than 17 million tablet activations on Dec. 25, more than doubling last year’s 6.8 million and even outpacing smartphone activations for the day. App download activity for the day was up over 100% as well.

Marketers and app developers traditionally race to get their apps updated and well-promoted just before Apple staff leave for the Christmas holiday and stop updating the App Store bestseller lists. The all-important leaderboards are among the most successful routes to compounding app success by surfacing titles for app-seeking device owners.