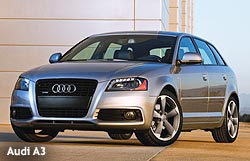 December gave automakers the gift of a strong finish to the year. Now, with a last-minute deal to avoid the cliff, the market gets another gift for 2013: continued recovery. Southfield, Mich.-based market auto analysis firm Polk sees a 6.6% rise in sales versus 2012. Auto research and shopping site Edmunds.com, which came out with its own prediction in December when things were looking dour for a deal, sees the market essentially flat for 2013.

Also helping things this year is a huge increase in new-vehicle introductions -- 43 planned for 2013 --  a 50% increase over last year, not to mention the introduction of 60 vehicles that have been redesigned or refreshed, notes Polk.

Anthony Pratt, director of forecasting for the Americas at the firm, said in a release that while the improving automotive picture won't reach the Everest-level pre-recession numbers of 17 million, it will help the entire economy.

Polk says the mid-size sedan segment, now at 18.5% of the U.S. market, will continue to lead the industry. “Recent redesigns of nearly every vehicle in the mid-size segment are forcing more competition and continued growth,” said Tom Libby, lead analyst for North America at Polk. “The current array of options for consumers in the market for a new mid-sized vehicle makes it a great time to buy a new car.”

Luxury will get a leg up because automakers are trying to “one-down" each other in compact vehicles that offer entrance to luxury brands: Audi A3 sedan (and electric), a coupe version of Cadillac's new ATS small car, Mercedes-Benz CLA, a new version of Buick's Verano, and a revision of Acura's troubled ILX are all examples. As gasoline prices drop, small luxury crossover business will increase as well, tracking the non-luxury compact crossover sector, which has grown 50% in five years, notes Polk.