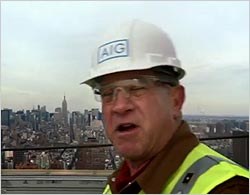 American International Group features its employees in a campaign that thanks America for its support during the global financial crisis.

The effort also highlights AIG’s recovery, commitment to the communities it serves, and the full repayment of U.S. government support, plus a combined positive return of over $22 billion.

Creative and media are handled by PARTNERS+simons agency in Boston. The spots were produced by Directorz and directed by Jeff Bednarz.

The campaign, which debuted Jan. 1 and will run for two weeks, shows how AIG helps American communities rebuild by acting as the lead insurer at the new World Trade Center, helping Joplin, Mo. come back from a tornado in 2011, and assisting the East Coast as it recovers from Hurricane Sandy.

Print ads will appear in upcoming issues of major publications, including The Economist, The Financial Times, The Houston Chronicle, the Los Angeles Times, The New York Times, USAToday, The Wall Street Journal and major trade journals.

Online ads buys include a masthead and mobile roadblock on YouTube, and home page takeovers of nytimes.com, MSN.com, WSJ.com and Yahoo. The campaign will also be promoted on social media and can be seen on AIG’s YouTube channel. Visitors to the channel are encouraged to subscribe so they can follow AIG’s story and learn how the company helps customers around the world.