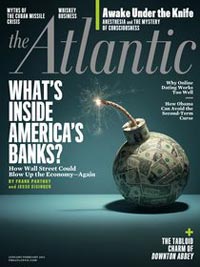 While the industry as a whole is struggling with declining print ad revenues, there’s hopeful news going into the New Year, as some big magazine publishers are reporting major growth in digital revenues.

The 'Atlantic' announced that digital advertising revenue increased 32% in 2012 compared to the previous year, and now makes up over half (59%) of its total advertising revenues. Its events business, AtlanticLive, which produces events like the Aspen Ideas Festival and the Washington Ideas Forum, posted a 24% increase in revenues compared to the previous year.

2012 marked the third year in a row of profitability for the company overall.

Separately, Wired said digital advertising contributed half of all ad revenues in the final quarter of 2012, according to Ad Age. For the year overall, digital ads contributed 45% of the brand’s total ad sales. That’s up from just 10% in 2006. Currently, about 90% of Wired’s digital ad revenues come from the Web, as opposed to mobile channels.

Yoga Journal will publish four special issues in 2013. The first, “The 21-Day Fitness Challenge,” will go on sale February 5th; the second, “Yoga at Home,” goes on sale on April 23; the third, “Healing & Happiness,” goes on sale June 25; the fourth, “Core Strength,” Oct. 1. The SIPs will take the magazine’s most popular content and combine it in single-subject issues for readers’ home practice. With circulations of 100,000 per issue, they will sell for $9.99 exclusively on newsstands.

Andrew Sullivan is taking his blog independent again. That means the well-known political/cultural  blogger is leaving the Newsweek Daily Beast Co., where his blog lived for some years. He is setting up a new company, Dish Publishing, to run his new (old) blog Web site, www.andrewsullivan.com, and asking readers to pay $19.99 per year for subscriptions. Sullivan has been at pains to emphasize that the new business model is not a paywall, but rather a “meter,” as readers first get to view a certain number of posts for free before being asked to shell out. The move is effective Feb. 1.

Marie Claire is starting off the year with some new appointments and a promotion on the editorial side. Erin Flaherty has been elevated to the role of beauty and health director -- up from her previous role as executive beauty editor. Byron Regej, a new hire, has been named design director; he previously served as senior art director at Los Angeles. Finally, Whitney Joiner has been named senior editor; she co-authored "The Drama Years: Real Girls Talk About Surviving Middle School - Bullies, Brands, Body Image and More."