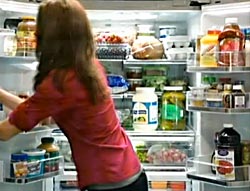 Samsung offered up three of the top 10 most effective ads of 2012, according to one metric. An ad for a new larger refrigerator led the pack, while a spot for its Galaxy Note came in third and one for a new tablet finished in a tie for ninth, according to Ace Metrix.

In second place in the overall rankings was a spot that also had refrigerator involvement as part of a wider branding-type ad for Frigidaire.

That ninth-place tie included a spot for the iPhone 5 backing its camera abilities and featuring cute kids, and one for Outback Steakhouse, which promoted special offers for military personnel.

Rounding out the overall top five were spots for Tide (fourth place) and Lysol (fifth). A Microsoft ad for its new Surface tablet finished sixth, while a Best Buy spot and one for Ford (which promoted the ability to open the back of an Escape with a foot) tied for 7th.

Another iPhone ad -- backing "ear-shaped headphones" -- made the top 20 in a 15th-place tie, where it was joined by a BMW ad with a young girl asking her mom "what is neutering" on the way to the veterinarian, a spot for new Nestle Crunch Girl Scout Candy Bar, and an Infiniti ad for a system allowing visibility for what’s behind a vehicle while backing up that prevents a collision with a child.

Super Bowl spots or Doritos and M&Ms finished in a 12th-place tie. Liberty Mutual, Pillsbury and AT&T spots also made the top 20.

Ace Metrix determines "creative effectiveness" from a national survey on a scale from 1 to 950 that takes into account viewer perception on "persuasion, relevance, information, attention, change, desire and watchability."

With the top 20, scores stretched from the Samsung refrigerator spot at 697 to an AT&T ad with Olympic gymnast Jordyn Wieber at 666 -- part of a campaign to discourage texting while driving.

Ace Metrix also released rankings for 2012 "brand of the year" across 15 categories,  including Cadillac and Infiniti tying in the "automotive luxury space," Ford winning in the non-luxury arena, Blue Moon winning in alcoholic beverages, Liberty Mutual Insurance tops in insurance and T-Mobile winning in telecommunications.

"Brand of the year" awards take into account the range of spots marketers ran in 2012. The survey process is similar, but in order to qualify, a brand must have "debuted five or more unique pieces of creative within an industry or category containing more than 125 pieces of creative and five qualifying brands."