All The News That's Fit To Read, Watch, Listen To And Touch 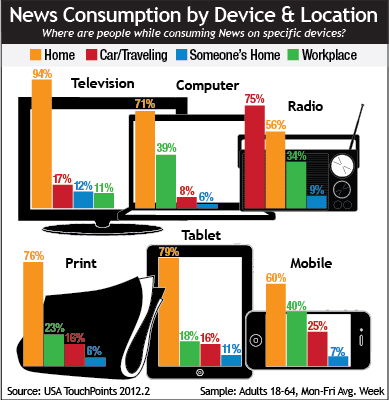 News, like every other form of content, is with us wherever we go, via any device or medium. This USA TouchPoints analysis shows us where we consume it most using our media of choice.

When major events occur, such as celebrations or disasters, or when our lives slip out of their usual weekly patterns, like holiday seasons, the ebb and flow of news consumption alters.

But when looking at data collected over the course of 12 months, it becomes possible to see where people who use a given device to consume news actually choose to do so in an average week (Mon-Fri). That lets us understand the physical context in which they are exposed to the programming and advertising messages associated with it.

Over time, such an analysis can also be re-visited to see how trends evolve.

News consumption in the home dominates overall and particularly in the case of television.

The only medium where home-based consumption does not dominate is radio where consumption in the car or other modes of travel leads by almost 20% over in-home.  This is no doubt heavily driven by the large amount of in-car radio use and the prevalence of the medium in the average American’s daytime hours.

It is interesting to note that the consumption profile of print and tablet mirror each other almost exactly in terms of locations and the extent to which they are used in an average week. Perhaps this indicates that the form factor of each and the nature of the content (requiring sustained attention) lends itself to an environment where the consumer has more time in a controlled environment vs. when on-the-go or in the workplace.

>
cross-platform, media
4 comments about "All The News That's Fit To Read, Watch, Listen To And Touch".
Check to receive email when comments are posted.
Read more comments >
Next story loading