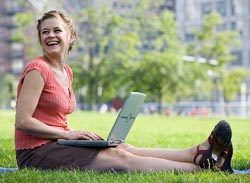 Google held a press conference Tuesday in its New York office to announce the rollout of free public WiFi in the Chelsea New York City neighborhood, creating the largest public network in the city -- the pulse of any startup.

Those surfing the Internet will have an option to connect to the high-speed network in Google's NY home turf, between Gansevoort Street and 19th Street, from 8th Avenue to the West Side Highway. Google CTO Ben Fried, U.S. Senator Charles Schumer, and representatives of the Chelsea Improvement Company announced the service.

A Google spokesperson said this will be a way to give back to the neighborhood community. The Chelsea Improvement Company, which will support the WiFi service, worked with the third-party company Sky-Packets to design and install it.

The move aims to build up the section of Manhattan dubbed Silicon Alley through a secured network, similar to Northern California's Silicon Valley. Google introduced WiFi in Mountain View in mid-2000.

For those who don't live in the area, the Google spokesperson describes the diverse Chelsea neighborhood as a mixure of low-income and affluent housing, along with schools and businesses.

New York Major Michael Bloomberg would like to see the neighborhood become a tech center, complete with startups, but office rent prices and Internet access remains some of the biggest cost hurdles. Some companies, such as Google, support local companies by giving back, paying for services or even office space.

Google last year worked with New York officials to begin building a technology mecca for startups. It agreed to donate interim office space to Cornell University and the Technion-Israel Institute of Technology for an engineering school.

"Each day access to the Internet becomes more and more important to finding a good job or getting a good education, and this neighborhood-wide wireless network will provide that resource to hundreds of thousands," Schumer explains.