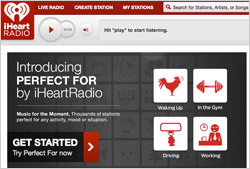 The Consumer Electronics Show in Las Vegas has brought with it a series of new equipment and software deals between carmakers, radio groups, and audio tech suppliers. This year’s crop of partnerships includes deals between Clear Channel Media and Entertainment and Toyota and Chrysler, and Ford and jacAPPS.

Toyota announced that some of its 2013 Toyota and Lexus models will integrate traffic and weather information from Clear Channel’s Total Traffic Network into their dashboard displays. The data will be delivered via HD radio signal -- apparently the first time a broadcast radio group has used digital radio’s ability to transmit rich content in addition to audio.

The Total Traffic Network’s weather content, supplied by The Weather Channel, will include Doppler radar, current conditions, and real-time forecasts.

Clear Channel scored another win with the integration of its iHeartRadio digital audio platform into the dashboard displays of some Chrysler Group vehicles. Chrysler vehicles with Uconnect Access Via Mobile will allow drivers with smartphones to access iHeartRadio through their touchscreen dashboard display.

Separately, Ford revealed a partnership making jacAPPS its preferred mobile app development house, with responsibility for configuring mobile apps for Ford’s Sync AppLink system. Ford Sync is a voice-activated command system that allows drivers to access media selections, driving directions, and other digital content without having to take their hands off the wheel.

jacAPPS will help radio stations tailor their mobile apps for the Sync system, so drivers can access radio station apps on the center display by using voice commands, as well as steering wheel and radio buttons. According to jacAPPS: “This is a significant breakthrough for the radio industry that will allow AM/FM stations to have parity on the vehicle’s digital screen.”