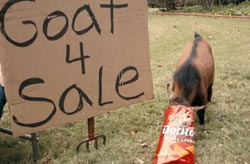 Animals and/or children are featured in four of the five finalist videos for this year's Doritos "Crash the Super Bowl" contest.

The five finalist entries, which can be viewed (and voted on) on the Doritos Facebook page, are:

*"Fashionista Daddy" (entrant: Mark Freiburger): A little girl uses a bag of Doritos to get her dad and his guy friends to play dress-up with her.

*"Road Chip" (entrant: Tyler Dixon): A little girl in a car seat devises a way to stop her dog from stealing her Doritos during their trip.

*"Fetch" (entrant: Joe Taranto): A dog-sitter, initially delighted when he discovers that the dog can fetch anything, including a bag of Doritos, makes one fetching request too many.

*"Express Checkout" (entrant: Sasha Shemirani): At a supermarket checkout, a man who attempts to shift a bag of Doritos from the checkout order of an apparently sight-impaired man into his own order gets a painful comeuppance.

Two of the user-generated videos will air as ads during the Super Bowl XLVII broadcast on Feb. 3: one chosen by public votes cast between Jan. 4 and Jan. 29 on the Doritos Facebook page or through the brand's Facebook mobile app, the other chosen by the brand team for Doritos, part of PepsiCo’s Frito-Lay division.

The finalist whose ad scores highest on the USA Today Ad Meter rankings will be awarded the opportunity to work with film director Michael Bay on the next installment of the “Transformers” movie franchise, along with a shot at a cash bonus.

Each of the five finalists wins $25,000 and a trip to New Orleans to attend Super Bowl XLVII in a private luxury suite at the game. During the game, they will learn for the first time which two of the ads have been chosen to be aired, and are therefore in competition for possible bonus prizes based on audience voting recorded by the USA Today Ad Meter.