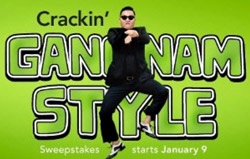 The spot, to air in the game’s third quarter, will also mark the first time that Psy (whose “Gangnam Style” video was the first to break 1 billion views on YouTube) has been seen in a U.S. TV ad.

Wonderful Pistachios originally planned to run two different, 15-second ads, but changed its strategy because the Psy creative, directed by Grammy Award-winning director Mathew Cullen, was so compelling that “we decided that it needed and deserved 30 seconds,” Marc Seguin, VP of marketing for the brand’s privately-held parent company, Paramount Farms, tells Marketing Daily.

The spot’s creative, which isn’t being previewed prior to the game, takes the brand’s long-running, seemingly ubiquitous “Get Crackin’” campaign to new levels, says Seguin, who reports that Paramount Farms has invested more than $100 million in that campaign in the four years that it’s been running.

After the Super Bowl, the Psy spot will continue to air on cable channels and primetime television, and will be viewable on the brand’s Get Crackin’ site and its YouTube site. Also, “behind-the-scenes” footage from the shoot will be released online, says Seguin.

The Super Bowl presence is also being supported by social media. One effort, launched on Jan. 9, is a Facebook-based sweepstakes in which fans who upload a picture of how they “Get Crackin' Gangnam Style” earn chances to win a 12-month lease of a 2013 Mercedes Benz SLK 250 -- the same model driven by Psy.

The brand also has reached out to YouTube “stars” (creators of videos that have drawn exceptionally high numbers of views), encouraging them to create parodies of its Psy ad once it’s been aired on the Super Bowl, reports Seguin.

In addition, Wonderful Pistachios will be throwing a “huge” event in New Orleans during the activities surrounding the Super Bowl, he says.

Importantly, the brand also will be expanding the substantial in-store promotions and merchandising efforts that it’s already been doing each year around the Super Bowl.

Starting this month, Wonderful Pistachios will have free-standing displays tied into its Super Bowl ad in about 50,000 stores (compared to about 10,000 stores for a typical promotion for the brand), with its largest-selling stores featuring two to four displays in various locations, and others featuring multiple displays, according to Seguin. Wherever possible, those displays will be near high-traffic store-entry areas or checkouts.

Wonderful Pistachios’ in-store strategy, combined with its investment in advertising, is the formula behind the brand’s remarkable growth since launching five years ago, Seguin confirms.

As CPGmatters recently reported, the retail strategy includes aggressive, ongoing merchandising and frequent special displays/promotions (sold and coordinated by a standing national field force of 135 merchandisers), which complement the brand’s core in-store strategy of being nearly exclusively located/sold on a regular basis in the produce departments of traditional supermarkets, rather than in center-store aisles.

Being located in produce (a strategy that was successful for POM Wonderful, another brand owned by Stewart and Lynda Resnick through their Roll Global holding company) gives Wonderful Pistachios more than one advantage.

First, produce is a department that (unlike some center aisles) is visited by nearly every grocery shopper, notes Seguin. Also, consumer demand for healthier snacks continues to grow, and consumers tend to look for healthier fruit, vegetable and nut snacks in the produce department, he points out.

“The key is that consumers see our ads, then ‘bump into’ the product when they’re in the store,” he says.

The Super Bowl ad -- and the intensified merchandising promotion around it -- is the next logical step for Wonderful Pistachios, says Seguin, who reports that it’s now the #1 snack-nut brand, having seen its dollar sales grow by 20% to 30% annually for the past several years.

He also confirms that CPGmatters’ estimate of about $400 million per year in sales for the brand is in the ballpark, adding: “We expect to go well beyond that this year.”

In fact, he confirms that the brand is “very confident” that it can break into the top 10-selling products in the $12-billion-plus salty snacks category, traditionally dominated by Frito-Lay brands, as noted by CPGmatters.

Beyond the Super Bowl, Wonderful Pistachios will continue to release new “Get Crackin’” TV spots in 2013, including a spot tied to a new partnership that will soon be announced, Seguin says.