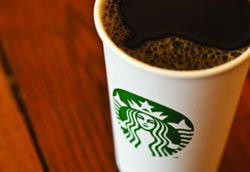 More than a quarter of American adults (28%) report that they have already purchased or plan to purchase one of Starbucks’ new $1 reusable coffee tumblers, aimed at  reducing paper cup waste, according to a YouGov Omnibus survey conducted Jan. 4-6.

Even 12% of non-Starbucks customers said they intend to purchase one of the cups.

Also, regardless of whether they would purchase a cup, seven out of 10 respondents said they believe it’s a good idea, and four out of 10 consider it a “very good” idea.

Starbucks began rolling out the new cups on Jan. 3. As an incentive, Starbucks is offering customers who use the cup a 10-cent discount on each refill, so that the cup pays for itself after 10 uses.

In addition to working with paper mills to get more of its paper cups recycled, Starbucks has long sold reusable tumblers -- but with limited success in terms of reducing cups that end up in landfills or as litter, reported USA Today. Despite its efforts, just 1.9% of its cups were multi-use in 2011 (up from 1.5% in 2009), causing the chain to reduce its original goal of having 25% of its cups be reusable by 2015 to a goal of 5% being reusable by that year.

Efforts by U.S. QSRs (and grocery and other retailers) to reduce container and bag waste continue to be hampered by force of habit: Even eco-minded consumers find it hard to remember to carry reusable cups and bags with them on their trips.

But Starbucks hopes that the low price of its new reusable cup will accelerate behavior change. In a test of the cup in 600 Northwest Pacific stores last November, the number of reusable cups rose 26% versus the same month in 2011, the company told USA Today.

While 57% of respondents to the YouGov Omnibus survey (results were weighted to be representative of U.S. adults 18 and older, with a margin of error of +/- 3.6%) said they probably or definitely won’t purchase one of the reusable Starbucks cups, 66% had not yet heard of the cup offer.

More than a third (38%) of respondents said that Starbucks should be applauded for its attempts to go green, and 23% said they think Starbucks is “generally an ethical company.” A minority (13%) said they wondered if the reusable cup is a “publicity stunt.”