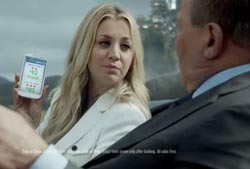 Priceline’s well-known “Negotiator” character (played by William Shatner) is getting some company in the form of his “secret daughter” in a new advertising effort.

In a new campaign launching next week, the daughter (played by Kaley Cuoco of the TV series “The Big Bang Theory”) comes forward to promote the company’s new Express Deals hotel reservation service, through which consumers don’t have to participate in a bidding process to find a deal on a room (as they do with Priceline’s “name your own price” service). Bringing in a new, younger (and prettier) spokescharacter is meant to appeal to a younger, more mobile-friendly consumer, says Brett Keller, the company’s chief marketing officer.

“Last year, we started off the year by throwing The Negotiator off a cliff,” Keller says. “As we’re now in year six of the Negotiator campaign, we wanted to add a new element of surprise to communicate a new product direction for consumers. She really represents the younger, more modern consumer who wants speed, ease and efficiency.”

In a new ad, a goatee-sporting Negotiator drives to the top of a mountain with a little girl, dropping her off in front of a secluded dojo. He’s shown picking her up decades later, after she’s an adult and has been trained in the art of finding the best travel deals. “Priceline is different now,” she says, holding up a smartphone. “Faster, easier, and you don’t even have to bid.”

“The essence of the campaign is saying [that] she represents no-nonsense speed and ease of use, while [The Negotiator] represents our old-school ways,” Keller says. “We still do that, and it’s still relevant, and it’s part of what our brand stands for. She brings a new dimension to a different crowd that has not used Priceline.”

“We’ve been advertising name your own price. With Express Deals, we’ve launched a new product, which sits next to it,” Keller says. “Especially for mobile consumers, this product is useful, and when you’re booking off a phone, you need something you can tap through quickly.”

Unlike the “name your price” option, which keeps many details of the hotel being bid upon a secret until the bid is accepted, the Express Deals service (which will “sit next to” the core offering, Keller says) allows customers to choose the city, neighborhood and star-level they want and see the hotel’s amenities and, in some cases, choose the bedding arrangement. (In exchange for more information, however, the discounts aren’t as steep.) Though Express Deals launched last year, the company is looking to promote it now as people begin planning spring break and summer vacations, Keller says.

“We’re leading up to several very important travel periods, and we wanted to get it in the market ahead of that,” he says. “We haven’t advertised [Express Deals] with TV, and this is our chance to push it out to consumers ahead of these key travel period.”