'Kimmel' Does Well In New Slot 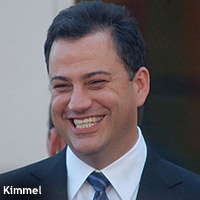 ABC's major late-night programming moves seems to be getting traction through the first three days -- with both "Jimmy Kimmel Live" and "Nightline" gaining.

ABC's half-hour news show "Nightline," which had the 11:35 p.m., regularly was tops in virtually all categories in the time period over the NBC and CBS shows.