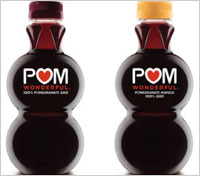 The Federal Trade Commission has upheld an administrative law judge’s decision that the marketers of POM Wonderful 100% Pomegranate Juice and POMx supplements deceptively advertised their products.

The commission’s opinion found that the marketers’ claims that the products could prevent or treat heart disease, prostate cancer and erectile dysfunction were unsubstantiated. It found that deceptive claims were made in 36 ads and promotions, whereas the May 2012 ruling by chief administrative law Judge D. Michael Chappell found such claims in only 19 ads.

The products are part of the Roll Global holding company owned by Stewart and Lynda Resnick, who had appealed that 2012 ruling.

The FTC issued a final order barring the products from making any claim that a food, drug, or dietary supplement is “effective in the diagnosis, cure, mitigation, treatment, or prevention of any disease” unless the claim is supported by two randomized, well-controlled, human clinical trials. The Order also prohibits misrepresentations regarding any test, study or research, and requires competent and reliable scientific evidence to support claims about the “health benefits, performance, or efficacy” of any food, drug or dietary supplement.

In a statement responding to the FTC's final-order ruling, POM Wonderful LLC said that it "categorically rejects the FTC’s assertion that our advertisements made any misleading disease treatment or other health claims."

The company intends toappeal the decision in the U.S. Circuit Court of Appeals, testing the FDA's new standard regarding "reliable, scientific" evidence behind food/beverage claims.

"With this ruling, the FTC is taking the unprecedented step of holding food companies like POM Wonderful to the same standards as pharmaceuticals," POM stated. "Their new legal standard would require food companies to conduct double-blind, placebo-controlled studies in order to talk about potential health benefits of fruits and vegetables...Consumers will be denied access to emerging science on the potential health benefits of fruits and vegetables. This would be a giant step backward in the campaign to get Americans to eat healthier."