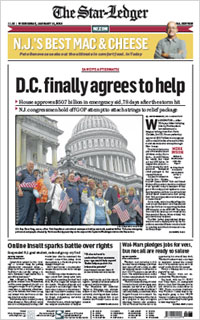 The litany of bad news for newspapers is continuing in 2013, with more layoffs and reductions in frequency.

The Star Ledger of Newark, New Jersey’s largest daily newspaper, announced that it is laying off 34 employees, including 19 full-time employees and 15 part-time employees, according to the newspaper. The total will include 18 staffers from the newspaper’s editorial operations, or around 9% of the 195-person newsroom.

Explaining the cuts, Publisher Richard Vezza cited the long-term decline in print advertising, as well as the economic effects of Hurricane Sandy, which devastated New Jersey households and businesses. Advance is also laying off 12 employees at The Express-Times of Easton, PA,11 employees at the South Jersey Times, and three employees from its weekly newspapers in western New Jersey.

Separately, Digital First Media, the parent company of the MediaNews Group and Journal Register Co., announced that it is slashing the frequency of one of its smaller newspapers -- The Oneida Daily Dispatch in upstate New York -- from six to three days a week.

The new schedule includes a new Sunday edition, as well as editions on Tuesday and Thursday. Although the Dispatch is a small publication with a circulation of just 6,599 according to the Alliance for Audited Media (formerly the Audit Bureau of Circulations), the move is significant because it may foreshadow frequency reductions at other papers owned by MediaNews Group and the Journal Register Co.

Also this week, Reuters revealed that it is laying off an undisclosed number of people, including at least nine staffers from its editorial operations, according to a Newspaper Guild memo that circulated online.