Infiniti To Tussle With The Teutonics 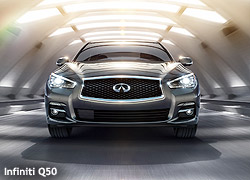 "The name's Q. Infiniti Q." Gone are names like G, M, F and J. The brand is making it simple and putting the brand before the car (for SUV's, it's henceforth QX.) Keith St. Clair, director of Infiniti global marketing, tells Marketing Daily that the change is important now that the luxury division of Nissan Motor is expanding its portfolio, starting with the 2014 Q50 sedan, which replaces the top-selling G car.

"We need the brand name to come first, as does just about any luxury brand," says St. Clair, adding that part of the automaker's strategy of giving the brand premium cachet involves the possible addition of a flagship saloon to the lineup, as Infiniti has never had a bona fide, high-end luxury car. "A true premium brand has to have a halo," he says.

Ben Poore, VP marketing Infiniti U.S.A., also spoke with Marketing Daily about Infiniti's ambitions, saying a top-end vehicle helps add a "lust factor" to the brand, "And it will help us realize our objective of becoming a member of the global premium elite." That requires getting serious consideration versus the European players."We definitely want to become part of that club. The biggest struggle is familiarity. It's a fundamental re-engineering of our business model."

Johan de Nysschen, president of Infiniti Motor, who took the role when Infiniti moved to Hong Kong six months ago, spoke at the Automotive News International Congress in Detroit. Among other things, he said becoming identified as a luxury brand means more revenue for Infiniti. "Luxury accounts for 10% and 12% of the global auto market, but also 50% of profits." He said that in four years Infiniti will have renewed all its existing models, and added four additional product lines including, potentially, a line of performance cars. "We will increase our global coverage (from 60%) to over 85% of the premium market."

To help get grab some of those percentages, the Japanese automaker has just hired Christian Blank as director of the brand's operations in central Europe, with a focus on Germany, Austria, Switzerland and Poland.

Infiniti also wants to make itself known for high-performance technology. The automaker races under the Red Bull Racing banner, and had its Red Bull Formula car on display at the auto show. Auto buff book Jalopnik reports that Infiniti this year becomes the title sponsor of Red Bull's racing program, which makes sense, as the brand is mulling adding a performance sub-brand.

Poore says Infiniti will activate with Red Bull, "where it makes sense." He says Infiniti has already done experiential programs on the ground at races, such as putting G convertibles side by side on dynos with a virtual race course so consumers can get a feel of the vehicle.

It's one big ongoing alliance is with Cirque du Soleil, with whom Infiniti became a partner in 2010. "We only do [such sponsorships] when we're both speaking to a similar audience," says Poore.