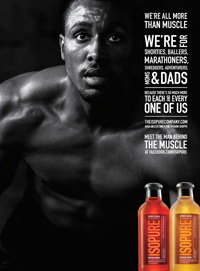 Isopure, a sports drink that has become a part of many professional and amateur athletes’ workout regimens, eschews the celebrity endorsements that are characteristic of so many ads in the category in favor of real people telling real stories in a campaign breaking this month.

The new effort from YARD in New York builds upon work the agency created last year for the brand that introduced the line: “We’re all more than muscle.” Those product-focused ads helped build record sales for the brand last year. This year, the company wanted to add something more inspirational and aspirational.

“After focusing on the product, we wanted to refresh the campaign,” Stephen Niedzwiecki, founder and chief creative officer at YARD, tells Marketing Daily. “When we first launched the campaign, ‘We are more than muscle’ was a signoff. In the next phase, we decided that it should be the biggest message out there, and it gave us the opportunity to explain what it meant to the consumer.”

Thus, the follow-up campaign shows how people have used the product to change their lives. Among the six athletes featured are: a motivational speaker against childhood obesity, a Harlem Wizards basketball player and an amateur female boxer. The athletes, who were selected through a nationwide casting call, will be featured in print and online advertising, and videos telling their stories will be featured on the brand’s Facebook page.

“It was a perfect opportunity to bring a bit more of the personal stories behind what ‘"we are all more than muscle’ meant,” Niedzwiecki says. “We wanted to use real athletes who not only exercised and achieved a physical level of being, but [could show] why they use this product and how it affects their life as a whole. It’s not just about how they physically look, but it’s about the things they are and things they do.”

One video depicts Karim (who nonetheless has bulging muscles) lifting weights while his voiceover explains that as a youth he was obese and living in the shadow of his physically fit older brother. When that older brother died, Karim experienced a “reality check” of “seeing my superhero in a coffin” and decided to get fit. A print ad, featuring the female boxer, declares: “We are all more than muscle. We’re for shorties, ballers, marathoners, shredders, adventurers, moms and dads because there’s so much more to each and every one of us.”

While the company could have used celebrities and professional athletes in its campaigns (particularly those who espouse the product on Twitter and other social media feeds), the brand opted to use regular people in its ads as a way of staying true to the brand’s beginnings, in which company CEO Hal Katz consulted regular people about their nutritional and fitness needs and creating a product around them, Niedzwiecki says. Also, the subjects provide more authentic stories.

“Not only were they knowledgeable about the product, they had amazing personal stories to share in regards to how their fitness shaped their life,” Niedzwiecki says. “There’s a lot more about why people get in shape than just having abs of steel.”

The campaign launches this week in publications such as GQ, Details and Stuff (as well as in fitness and health magazines, where the previous campaign had appeared), and will run throughout the year. Although many other nutritional products have launched campaigns to coincide with the New Year’s resolutions, the Isopure campaign is meant to run throughout the year, regardless of other events.

“We’re not worried about being a New Year’s resolution per se,” Niedzwiecki says. “This is a long-term message and brand value for us.”