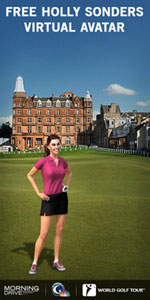 The Golf Channel has a deal with online game marketer WGT to offer a virtual tour, including an opportunity to “play” such famed courses as St. Andrews and Bethpage Black.

The free gaming will be housed on a network micro-site.

Participants can engage in social gaming and join tournaments and sweepstakes. The network will plug the Golf Channel Virtual Tour on-air, including during “Morning Drive.”

An avatar of “Morning Drive” co-host Holly Sonders is being used to promote the game. WGT, or World Golf Tour, can be played online or via an iPad or iPhone app.

The gaming could offer the network an advertising platform. WGT says 94% of its user base are golfers and spend 35 minutes+ when visiting its site.

“The growth of online gaming has been impressive, and this partnership gives Golf Channel not only a new way to interact with a growing community of passionate golfers, but also offers another way for our viewers to enjoy the game in a relevant and authentic way,” stated Mike McCarley, Golf Channel president.

The courses available are shown with “high definition photography” and include other courses, such as Congressional Country Club and the Olympic Club.