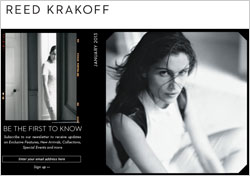 With all eyes on Washington, D.C., for the inauguration festivities, a handful of fashion brands are coming away with landslide victories. Luxury designer Reed Krakoff, who created the blue dress and matching cashmere sweater worn by First Lady Michelle Obama at Sunday’s official swearing-in ceremony, and Thom Brown, designer of the chic menswear inspired coat she wore for Monday’s festivities, are the biggest winners. But Michael Kors, J. Crew and Kate Spade all got their 15 minutes, too.

While all first ladies have plenty of juice on Washington’s biggest fashion day, Obama’s passion for both chic and affordability appear to give her an unprecedented amount of brand and economic influence. David Yermack, a New York University Stern School of Business professor, has done research on her clout, calculating that her fashion selections for the 2009 event resulted in $5 billion in shareholder gains, with the stock prices of companies selected by FLOTUS rising an average of 1.7% in the week after the event. (As a refresher, they included an embellished lemon grass-hued outfit by Isabel Toledo, which vaulted the Cuban-born émigré designer to superstardom, and a pair of moss green gloves from J. Crew that were so coveted that would-be buyers actually crashed the J. Crew Web site.)

Fashionista, the fashion blog, reports that Obama did some quick changing throughout the day, continuing her pattern of “high-low dressing,” mixing pricier pieces by little-known designers with affordable ones from household names. She wore the Thom Brown coat with bare legs and J. Crew pumps to the church service early in the day, then switched to a pair of Reed Krakoff boots, adding a J. Crew belt and bright purple gloves in time for the parade.

Malia Obama appeared in a J. Crew coat, while younger sister Sasha wore a dress and coat from Kate Spade.

And in an apparent plug for sensible style, Obama chose a black, sparkly sleeveless dress by Michael Kors for the inaugural reception, held at the National Building Museum. It’s from her own closet, reports Forbes, and one she first wore in 2009.