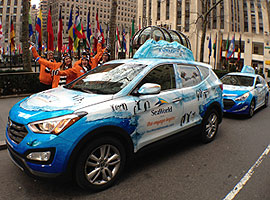 SeaWorld Orlando is kicking off its "Epic Voyage" campaign in New York City as part of its launch of the park's largest-ever attraction opening this spring.

The campaign for “Antarctica: Empire of the Penguin” includes stops in seven cities and a new mobile app, both designed to give families a sneak peek into the new attraction's adventure in ways as amazing as the continent itself.

The exhibit aims to transport families into a rarely seen, icy world. They will feel the majestic grandeur of the South Pole and see it through the penguins' eyes on an exhilarating, first-of-its-kind family ride. They will explore a massive penguin colony in an expanse that envelops them in cool extremes, both above and below the penguins' icy world.

Street teams will roam the cities in wrapped, Antarctic-themed Hyundai Santa Fes and Sonata Hybrids as they mingle with locals at various hot spots, commuter stations and key landmarks.

The mobile app allows fans the world over to put themselves in the action and also includes interactive elements to share with friends. From behind-the-scenes teaser videos and tour details, to penguin fun facts and trivia, consumers can immerse themselves virtually into Antarctica through augmented reality and also enter the Family Voyage sweepstakes.

Two families will receive a 4-day, 3-night journey to SeaWorld Orlando to be one of the first to experience Antarctica: Empire of the Penguin. The vacation for four includes roundtrip airfare provided by Southwest Airlines, hotel accommodations, as well as tickets to SeaWorld and Aquatica in Orlando. The app, SeaWorld's Antarctica, is available for download today on iPhone/iPad and will be coming soon for Android devices.

Since the exhibit was announced in November 2011, “we've been planning and looking forward to bringing a glimpse of the attraction to these key markets to connect with our fans and let them feel the chill," said Toni Caracciolo, vice president of marketing & sales for SeaWorld Parks & Resorts Orlando, in a release.