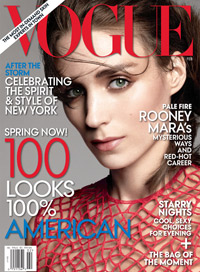 Fashion magazines are seeing a big uptick in ad pages for their March issues, according to Media Industry Newsletter, which recently revealed figures showing double-digit percentage increases at many big titles.

These results are building on a strong 2012. According to the Publishers Information Bureau, total ad pages for the year were up 18.5% at Allure, 6% at Elle, 11.1% at Harper’s Bazaar, 5.4% at InStyle, 11.9% at Marie Claire, 3.8% at People StyleWatch, and 3.7% at Vogue. These figures compare favorably with an overall 8.2% decline for all consumer mags tracked by PIB

Rodale Inc. has named Bobby Chowdhury to the new position of chief technology officer. In this role, Chowdhury will oversee all IT assets and strategy for the company, including expansion of Rodale’s Web and software development teams. He will participate in the the development of the company’s e-Commerce platform Rodale’s, slated to launch this spring. Chowdhury joins Rodale after four years at Condé Nast, where he served as vice president of engineering for digital technology.

Magzanyan, Miller To The Hollywood Reporter

Newsmax, a conservative newsweekly, is getting into the radio business with a new talk show hosted by Steve Malzberg, who formerly hosted a syndicated talk show on WOR Radio in New York. The new daily show will premiere on February 4 and air daily from 3 p.m.-6 p.m. on radio station affiliates yet to be announced; it will also be simulcast on Newsmax TV, an online media station featuring news, interviews, lifestyle and entertainment programming. “The Steve Malzberg Show” is the channel’s first show to be live streamed. The company plans to develop a free 24/7 TV streaming channel over the next several months.

Daniel Borchert has joined American Express Publishing’s Departures as an account manager, publisher Steven DeLuca announced. Borchert previously served as national sales director of TheDailyMeal.com. Before that, he served as integrated brand director of Woman’s Day, and was also worldwide brand director for Fortune. From 2000-2007, he worked at Condé Nast titles, including Vanity Fair and Lucky.