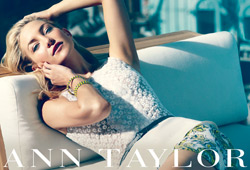 Clothing queen Ann Taylor says it is bringing back actress Kate Hudson as the face of the brand, appearing in its spring and summer advertising campaigns. In addition, it says the actress will also develop a capsule collection for the chain, in conjunction with creative director Lisa Axelson. Available in May, the company says the collection will include dresses that draw on Hudson’s red carpet style.

The spring 2013 ads were photographed by Norman Jean Roy at Milk Studios in Los Angeles, and are scheduled to break early next month, featuring Hudson in “vibrant colors, modern florals and graphic prints.”

The retailer says it has also named Hudson to its ANNpower Advisory Council, and an initiative aimed at teaching leadership skills to young women called Vital Voices. "We are so proud to build on our existing partnership with Kate Hudson, someone that genuinely represents our continued commitment to celebrating women of substance and style," Kay Krill, President and CEO of parent ANN INC., says in its release. "She is a role model to young women."

Earlier this year, the company announced the kickoff of this year’s search, with “Do you know a girl who wants to change the world?” signs in store windows.

The goal is to identify 50 girls -- rising high school juniors and seniors -- and the selection process closed Jan. 21. Once chosen, the group will get leadership coaching from “prominent women leaders from around the world as well as a chance to turn their trailblazing ideas into real projects that will positively impact their home communities,” the company says. In addition, they will be invited to participate in a three-day leadership training forum in April.

Grants are scheduled to be awarded in the fall, so winners will spend the school year completing their projects, with ongoing mentorship from Ann Taylor staff.