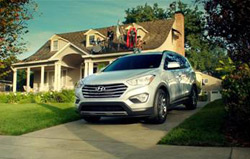 A couple of days ago Steve Shannon, VP marketing at Fountain Valley, Calif.-based Hyundai Motor America, hinted that its Super Bowl pre-kickoff ad, "Epic Playdate," would feature a major alt-rock band and also use their original music made for the ad. The Flaming Lips is the group to grace the “Epic PlayDate” spot.

The new track is “Sun Blows Up Today.” Shannon tells Marketing Daily that the idea had always been that music would play a big role in the spot. "We wanted original music, and we picked the Flaming Lips partly because we knew they had an album coming in two months," he says. He adds that the Lips are going to release the song as a bonus track on their forthcoming album. And they are featured in the spot.

"Our decision to use the Flaming Lips goes back eight or ten weeks. It was an organic process where they wrote the music, but the decision to put the song on the album is only six days old. So, in a limited sense, we are in the music business."

Greg Braun, executive creative director at Innocean USA, tells Marketing Daily the band hasn't been overexposed in such projects, so they were a great choice. "The wonderful thing about the Lips is that while they are also appearing in this commercial, they are not a 'commercial' band. They have deliberately done very little of this; they are very selective about projects they get involved in."

The track will also be available for purchase on iTunes, and Hyundai will offer 100,000 downloads on HyundaiUSA.com.

There's also another music theme in Hyundai's other Super Bowl spot for Santa Fe, where a kid brings together a team to confront a bunch of bullies. The ad uses Quiet Riot's "Bang Your Head" from the "Mental Health" album. "We listened to a lot of 80's heavy metal and that won out. It fits a slightly older group but also fits the action."